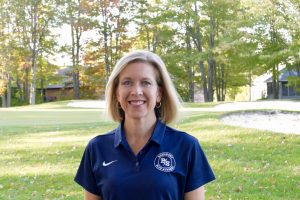 She will replace Talia Trovato who coached the team the past three seasons before a job opportunity took her to Florida following the 2019 season.

Bangasser played competitive junior golf at the local and state levels and even made an appearance at the Optimist Junior World Golf Championship in La Jolla, California.

She went on to attend Gilmour Academy and played on the boys golf team during the regular season while competing as an individual during the girls postseason tournament.

Three straight years, Gilmour’s Valedictorian from the Class of 1990 cracked-the top seven at the girls state tournament. She earned a fifth place finish as a sophomore, placed third as a junior and concluded her career with a seventh place finish in Columbus.

After her high school days were over, Bangasser attended the University of Notre Dame and played all four years for the Fighting Irish. She lettered as a sophomore before missing half of her junior season due to an injury.

She was named to the National Golf Coaches Association All-Scholar Team as a senior at Notre Dame and has since won club championships at two local clubs while continuing to play competitively on a local women’s team.

Bangasser lives in Concord with her husband, Mark. The couple own and operate a small business in Mentor and have two children, Dillon who is a freshman at the University of Notre Dame and Lauren who is currently a sophomore on the Beaumont golf team.